Cordele, also known as "The Watermelon Capital of the World", is a city in Crisp County, Georgia, United States. The population was 11,608 at the 2000 census. The city is the county seat of Crisp County. Cordele is located along Interstate 75, 140 miles south of Atlanta and 100 mile north of the Florida state line.

In November 1864 the area that is now Cordele served as the temporary capital of Georgia. During the last days of the Confederacy, Georgia's war governor Joseph E. Brown used his rural farm house to escape the wrath of Sherman's "March to the Sea." During that time the farm house which Brown called "Dooly County Place" served as the official capital for only a few days. It was replaced in 1890 by the Suwanee Hotel, located in what became downtown Cordele. The hotel was destroyed by a fire in late 1994 and was rebuilt.

The small town of Cordele, GA was founded in the southern part of Dooly County in 1888 by J.E.D. Shipp of Americus. The city of Cordele was incorporated on December 22, 1888. It drew great benefits from the presence of two major railroads-the Savannah, Americus & Montgomery line and the Georgia Southern and Florida. It was named after Cordelia Hawkins, daughter of the president of the SAM railroad, and the town flourished from the junction of the two railroads.

As the railroads brought more people and business to the newly settled territory, Cordele was experiencing phenomenal growth. Before 1905 Cordele was located in southern Dooly County nine miles from the county seat in Vienna. With Cordele's continued progress, many in the community felt the need for a seat of government to be closer in proximity than Vienna. Crisp County was formed in 1905 by taking a portion of southern Dooly County and Cordele became its county seat.

By August 1930, Cordele housed the first county-owned electric system in the form of the Crisp County Hydroelectric System. Located on the Flint River, the hydroelectric plant continues to operate and the resulting Lake Blackshear has attracted residents to its water-front properties.

In 1968 a Titan missile was erected at the intersection of I-75 and U.S. 280 East,where there is also a Krystal restaurant. 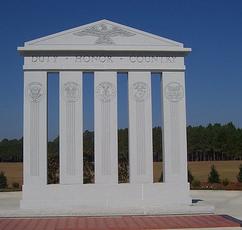